ATB Fight Back To Win Against Castilla 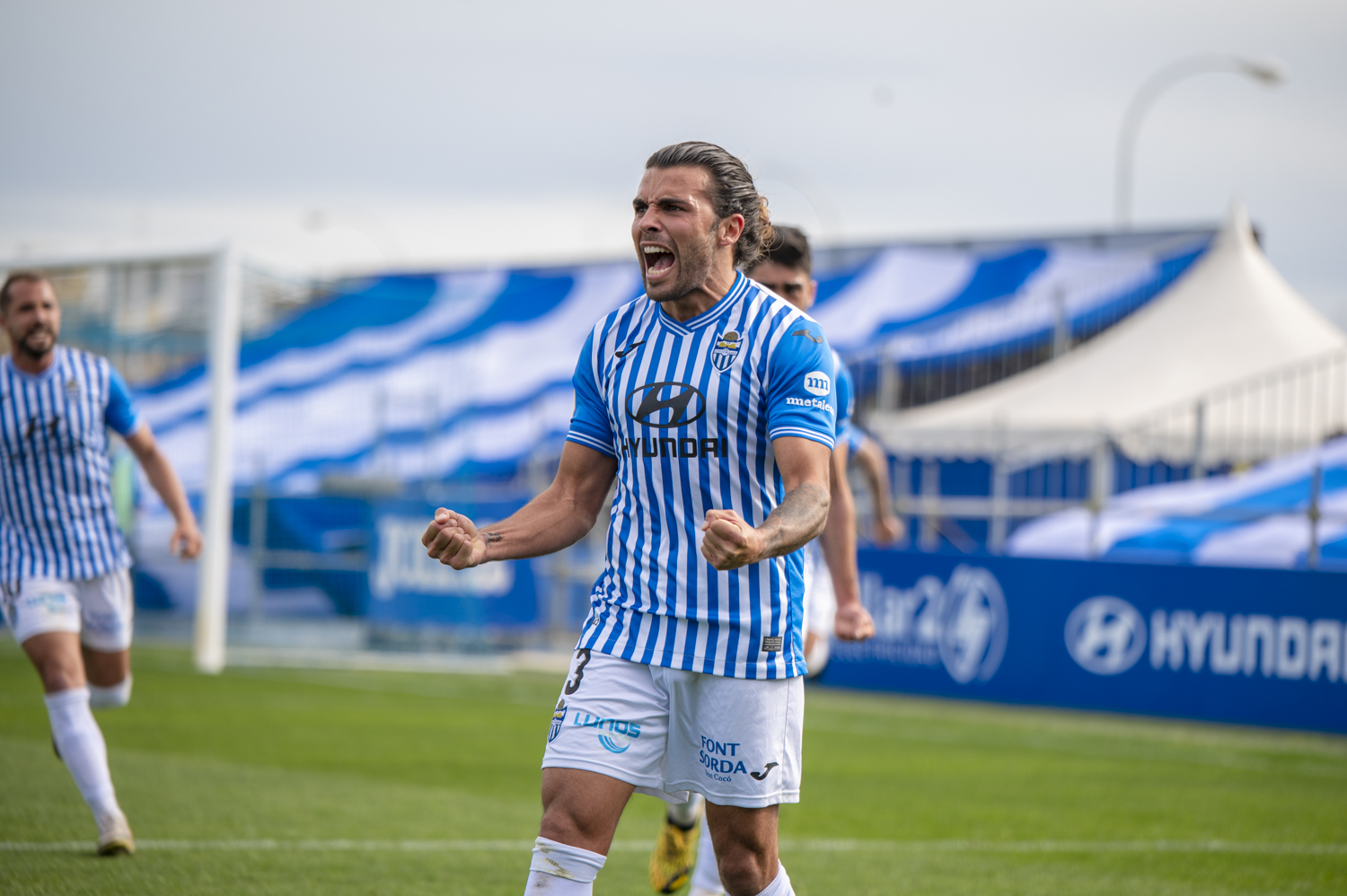 ATB Fight Back To Win Against Castilla

ATB welcomed a direct rival in the fight to finish in the top 3 league places that would allow them to start to dream about promotion. Real Madrid Castilla, led by Raúl González Blanco, came into the game on the back of a 3-1 win last Wednesday to league leaders Sanse. Jordi Rogers went for a starting 11 with only two new changes from last week’s game in the Cerro del Espino. Xavi started in goal, Miguel Acosta came in at right back, with Peris, Olaortua, and Cristian completing the defense. A double pivot of Alfonso and Cordero with Canario and Alberto Gil (the second change) on the wings made up the midfield behind strikers Coro and Vinicius.

The game started with a stroke of bad luck, as midfielder Alfonso suffered an injury to his left knee in the 11th minute and had to be substituted for Armando. The first half an hour saw Castilla holding the ball and pressing high, apparently unaffected by their efforts earlier on Wednesday. With a back three and two wingbacks, Raúl González set out a tactical game letting Dotor pull the strings for Castilla. Castilla were always looking to play down the right and get talented and pacy winger Peter on the ball, who looked to cut inside onto his stronger left foot.

The game was quiet until the 33rd minute when Vini fouled Peter who struck a left footed shot from outside the box that surprised Xavi Ginard for 1-0. Vini could have levelled the score four minutes later with a header in the 37th minute from a corner that went narrowly wide. Real Madrid Castilla had an opportunity for a second with Gelabert’s shot skimming past the post from outside the area but the teams went in at the break with the score at 1-0.

After the break, the game turned on its head and Jordi Roger’s men got stuck in from the first minute. Alberto Gil was subbed off at half time to be replaced by David Haro. ATB stepped up their game, aware of the importance of the game and the difference was clear, even though the first chance of the half fell to Hugo Duro for Castilla, who shot wide in the 46th minute. In the 56th minute ATB got the equaliser with a training ground routine from a corner taken by Peris and swept in by Olaortua at the near post; 1-1 and delirium for the team. In the 60th minute it was the same pair who were on the brink of scoring a second by the final shot was just wide. ATB wanted more. In the 62nd minute Gelabert got in behind the defense but put his shot into the side netting, and a minute later ATB got their reward. Jordi Roger had brought on Manel for Coro and the Catalan won the ball the play in Vini who finished inside the 6 yard box. The Brasillian dedicated the goal to his unborn daughter; his fifth of the season and ATB’s top goalscorer. ATB had to roll their sleeves up and fight tooth and nail to protect their lead. Baselga and Pedro came on towards the end and helped to fight for the ball, all of the substitutions had paid dividends during the game. In the 80th minute Hugo Duro had a header saved by Xavi, and the goalkeeper looked solid all game. He was called on again in the 81st minute saving again with his feet to prevent an equaliser. After the five minutes of added time were up it was a huge relief to have returned to winning ways in El Estadio and come away with three points. However there is no time to celebrate, and the team will be back working tomorrow to prepare for the game against DUX on Wednesday, which was initially delayed by storm Filomina. Another rival for third place.

Minute of Silence: A minute of silence was held in memory of Toni Pons ‘Caliu’, lifelong Balearico, who died from coronavirus in the last few days. The club hung a banner with NO TO RACISM with an image of Vinicius as a response to the incident last week.

Jordi Roger: “The team suffered, but if anyone didn’t expect to against this opponent.. It was difficult. I already said in the pre match presser that they are a good team; technical, fast, good one on one. The first half we weren’t very good, despite starting well. The injury to Alfonse knocked us out of our stride and they took advantage after a ridiculous foul and they scored. The second half we were better then them and we were decisive in an equal game that was decided by fine margins. I’m happy for the players and for the fans. Very happy. It was a 7 point game; our 3 points, those that they didn’t earn and the goal difference. It is a question of believing and having faith, that is what we focus on, game to game, and we have taken 9 points from 12, the others are also playing. Everyone is playing a lot right now. Right now we enjoy it, but from tomorrow it’s back to work to prepare for DUX who are on fire. I’m happy for Vini, he already had our support and the fans’ after the incident (last week). He is an important player for us, important that he scored for the goal, also great work from Manel, he gave us a spark, won the ball for Vini’s goal. Happy for the players, the substitutes worked hard and they made a big impact: Baselga, Pedro Orfila.. They provided that spark and that is teamwork. Yesterday Castilla had Chust in Huesca and today he turned up to play, Arribas is higher league level and here they are in the best place. Alfonso is an important player, that is the only negative point from the game, we will see how they pan out with his knee, his injury took us out of the game. In the first half we corrected that we were not playing together, and they were winning the second balls and attacking. Vini and Manel when you get the ball into the box at this level can always make things happen. This win makes us believe as a team and I’m happy for the players and for the fans, that couldn’t be here but have still hung up their flags. We cannot celebrate at all, we have to get stuck in because Wednesday we go against DUX, who are above us and beat us 0-3 (earlier in the season). We need to bounce back, compete and try to win. I spoke with Raúl, he is a great person. We work a lot on set pieces, we have 6 goals from corners, and that’s no coincidence. That’s a lot of goals and we work to achieve it. Peris’ delivery was great, it’s very difficult to defend and that’s a weapon we have to take advantage of. It’s a difficult skill to work on, but it will provide a lot of points by the end of the season“

Olaortua: “We knew that Madrid is a great team, at 1-0 we knew that if we equalised we would have chances (to win) and I think that we deserved the win. We have great set piece takers, I’ve never been a goalscorer but I’m happy to help the team. It’s never nice to hear racist chants and I’m pleased that Vinicius scored, it will be good for him. Wednesday we have an important game that we have to win, now every game is important because the league is short and we have to go for it with everything”. 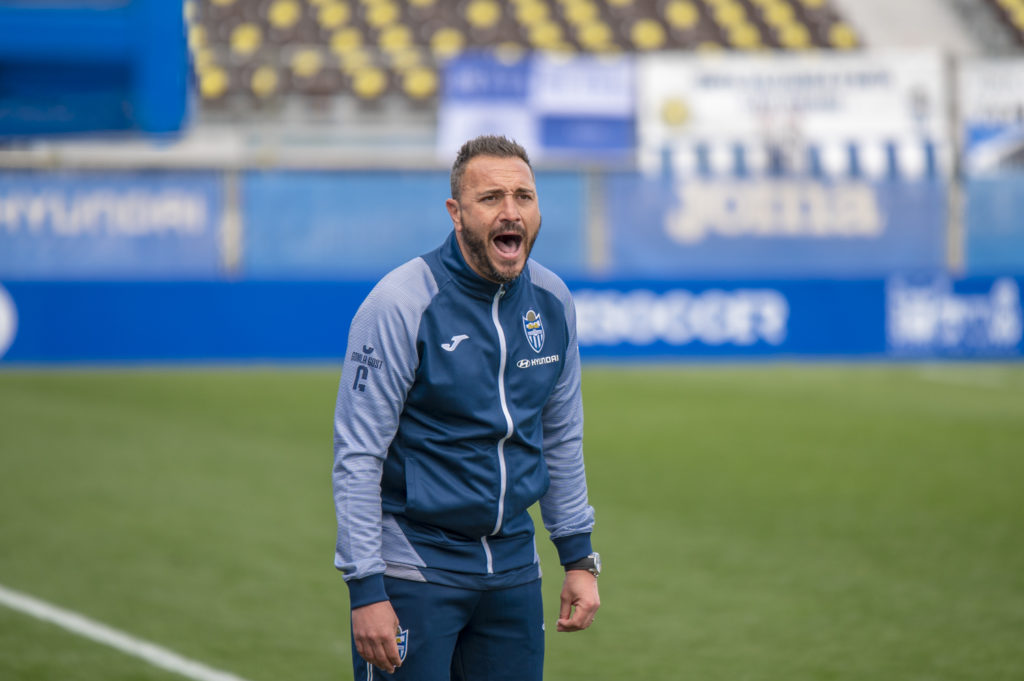 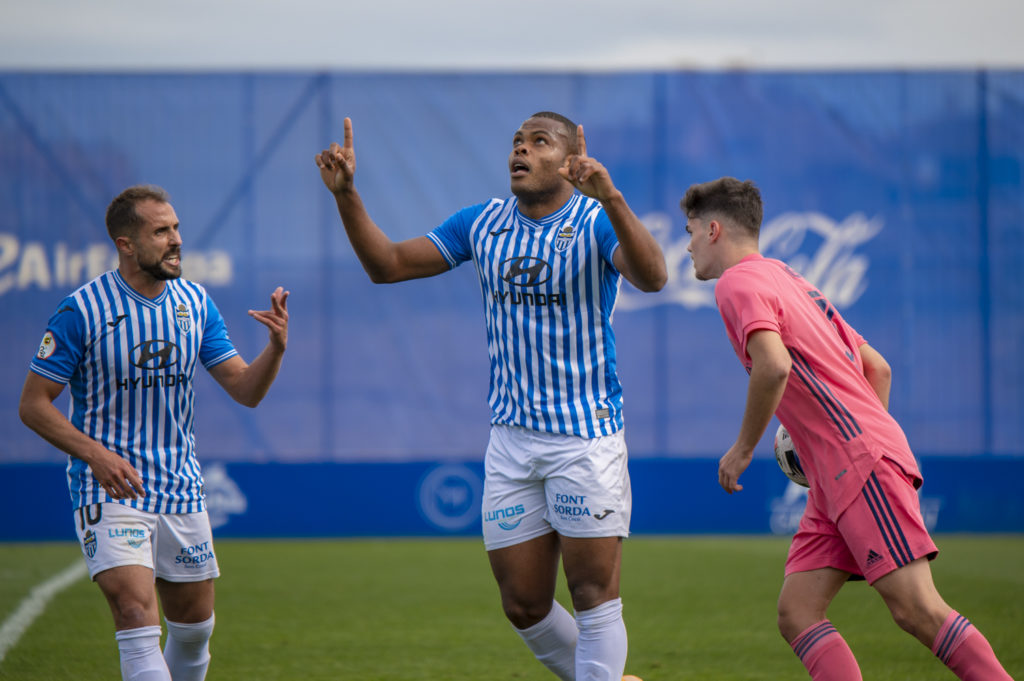 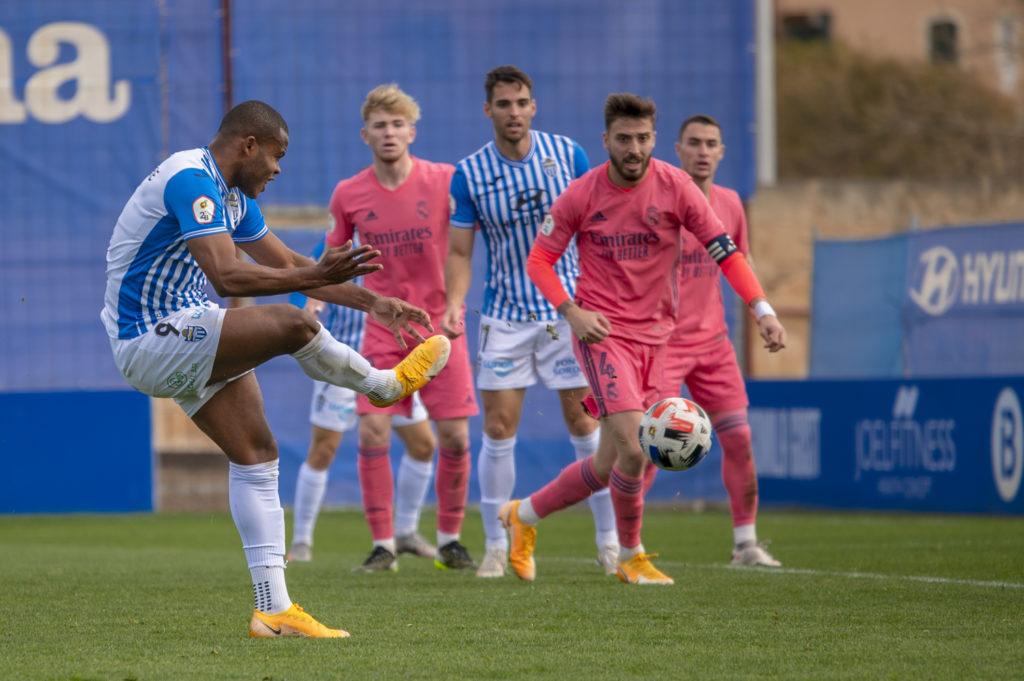 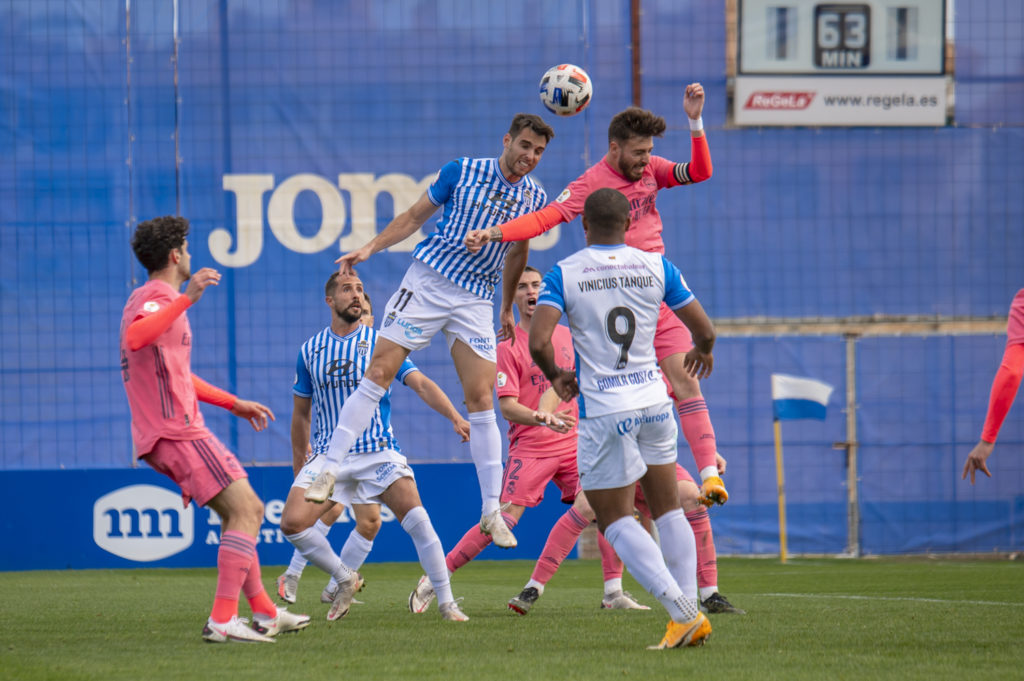 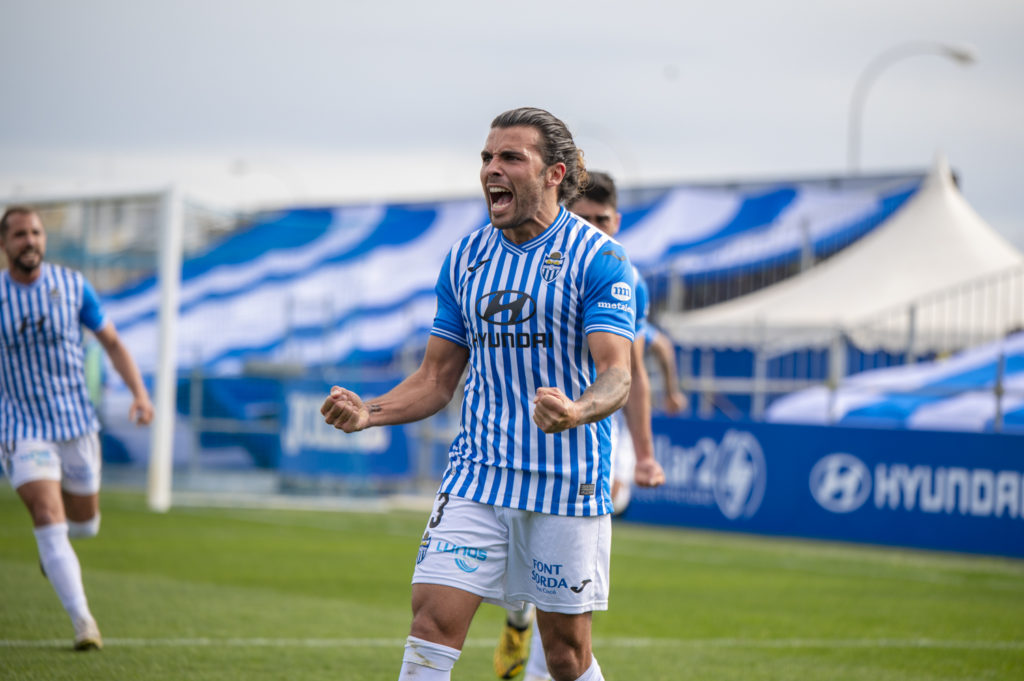 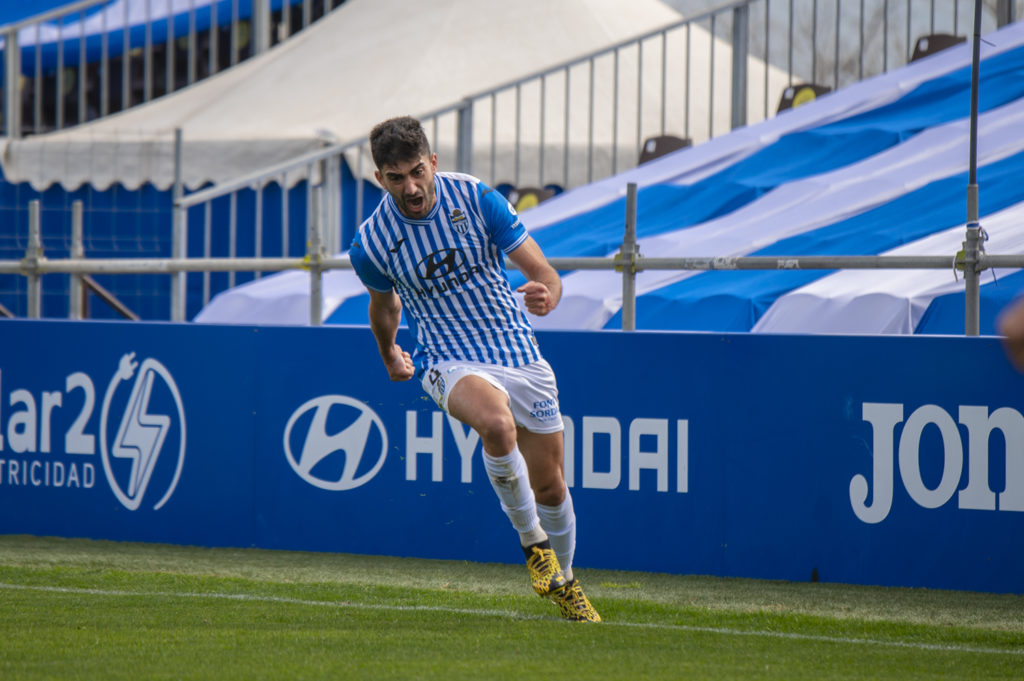 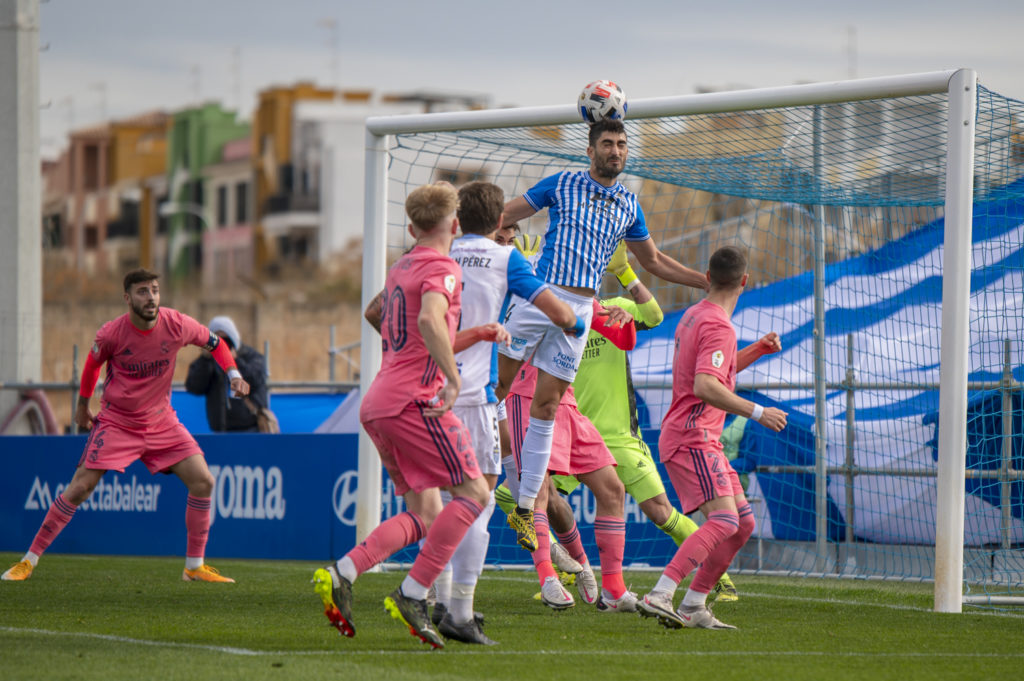 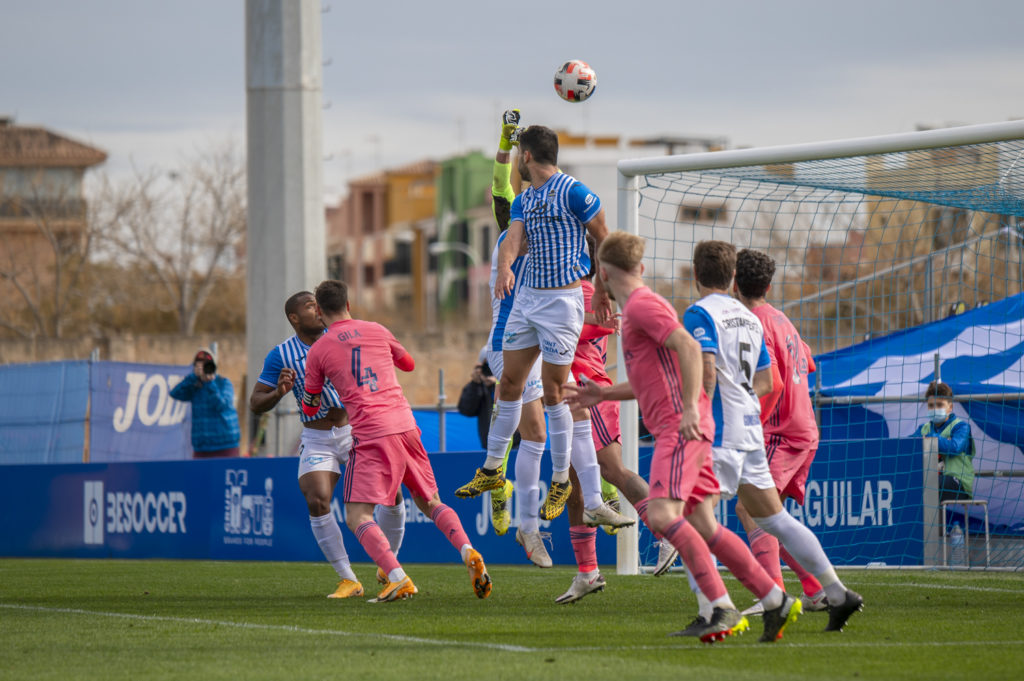 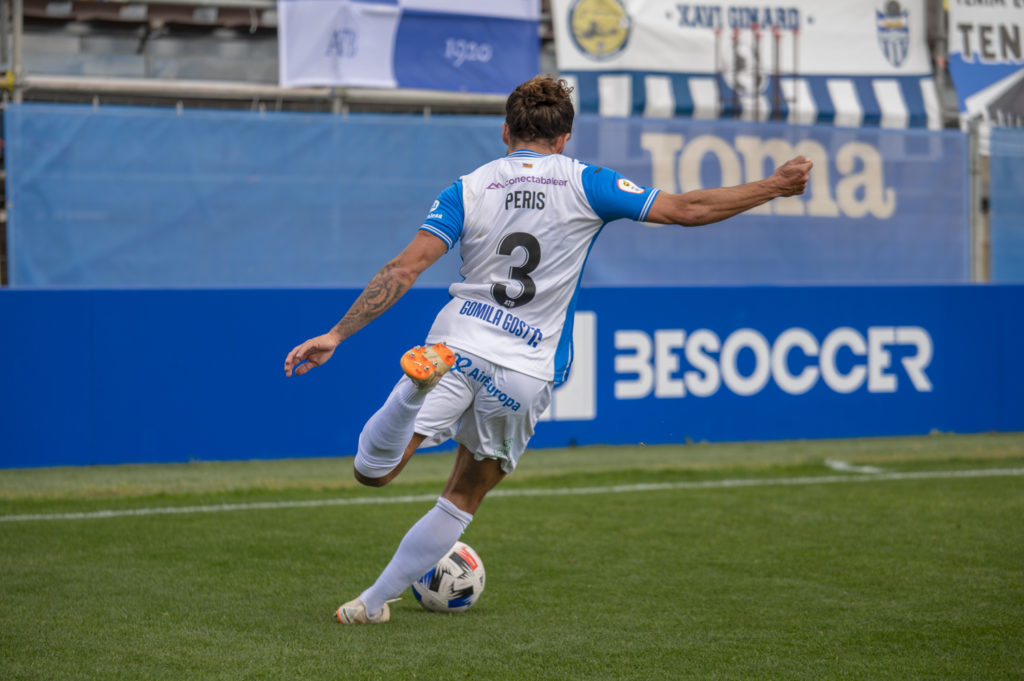 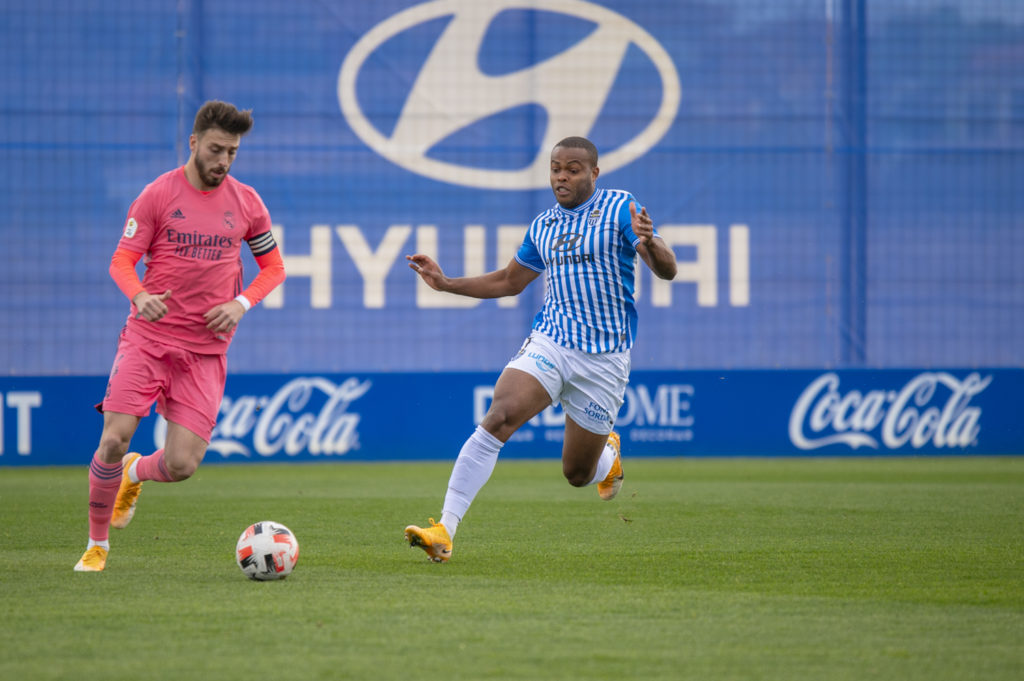 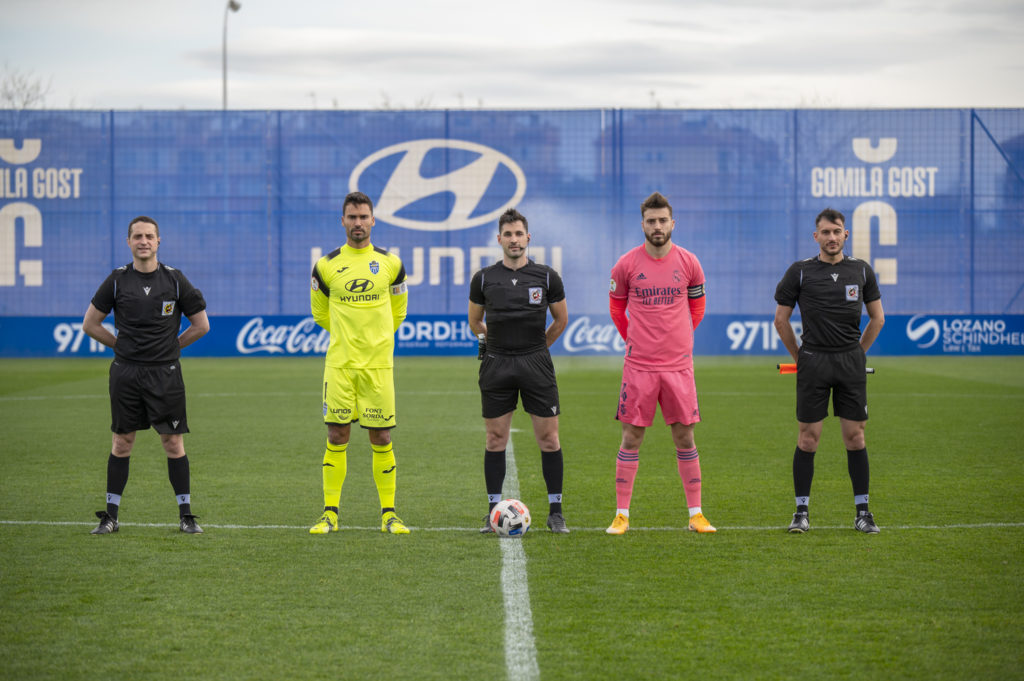 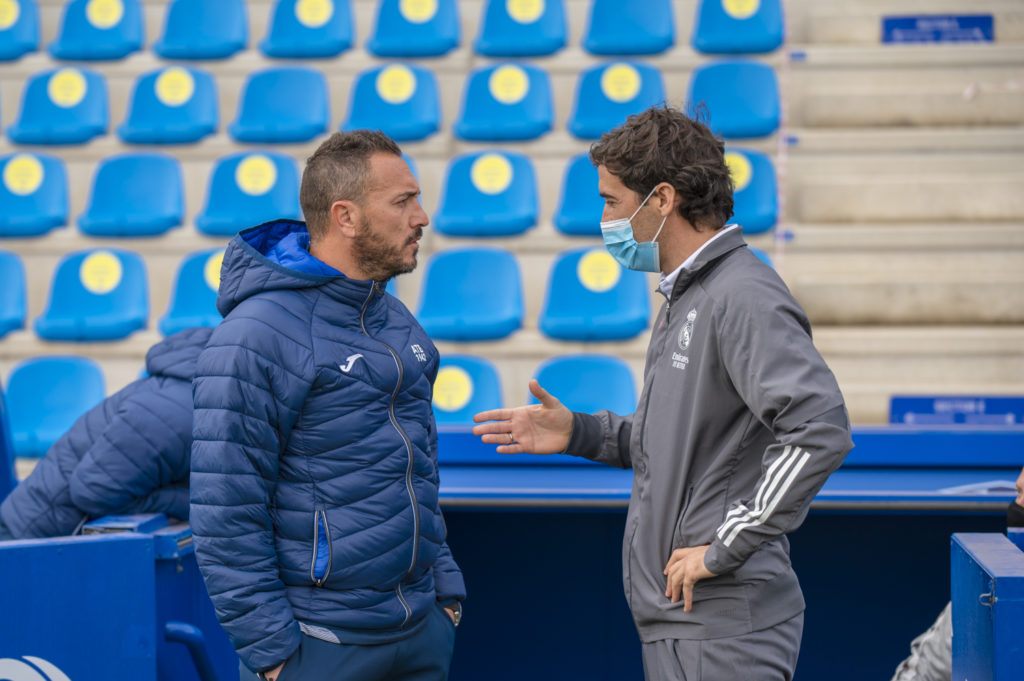 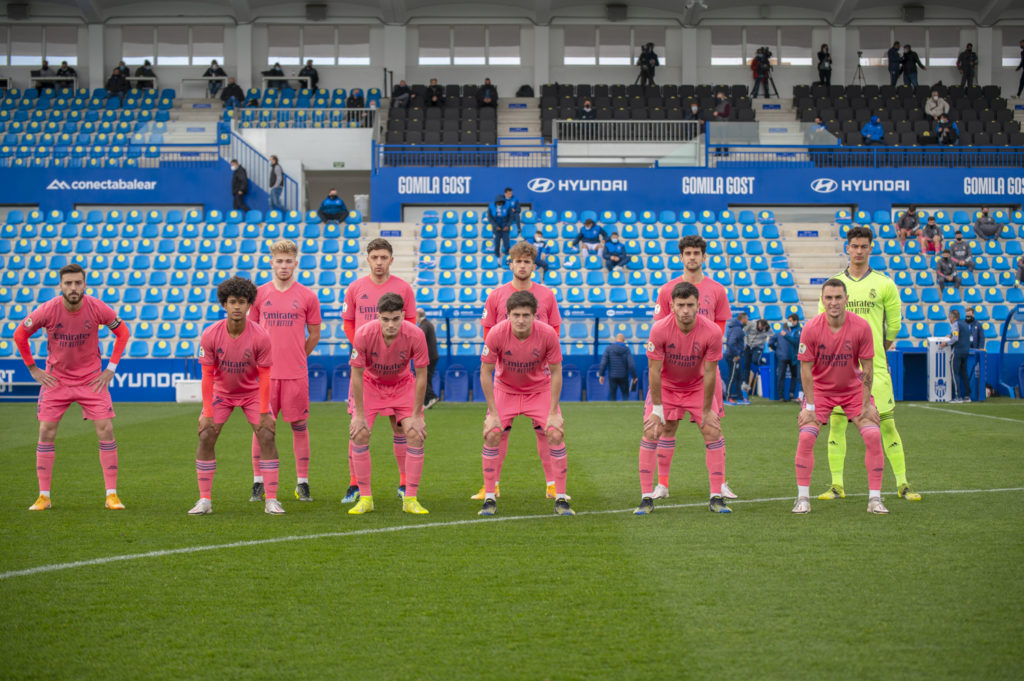 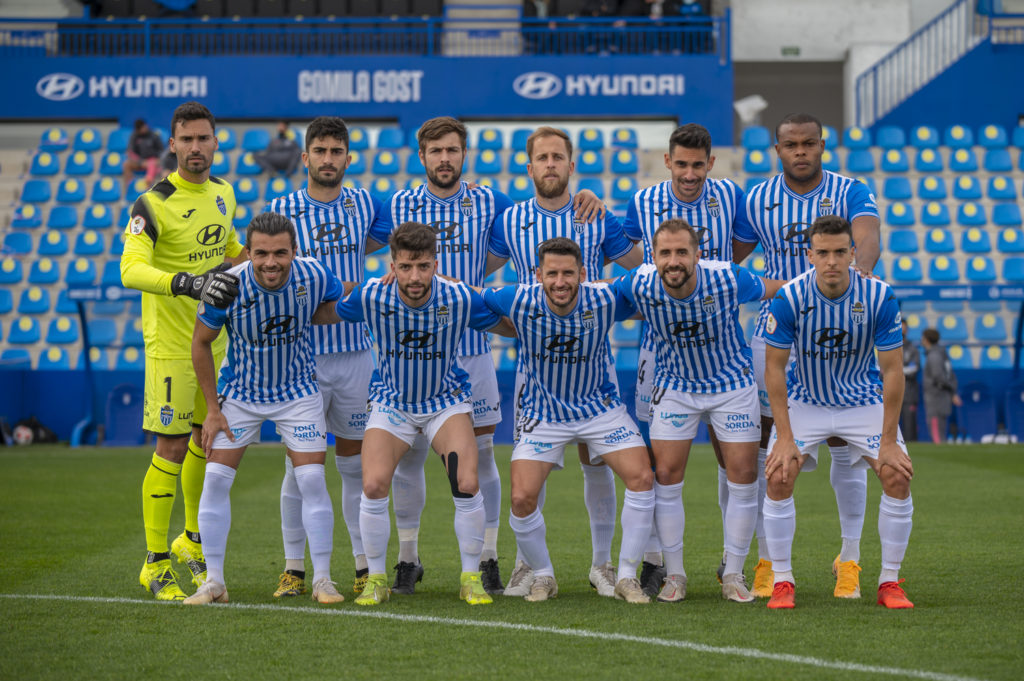 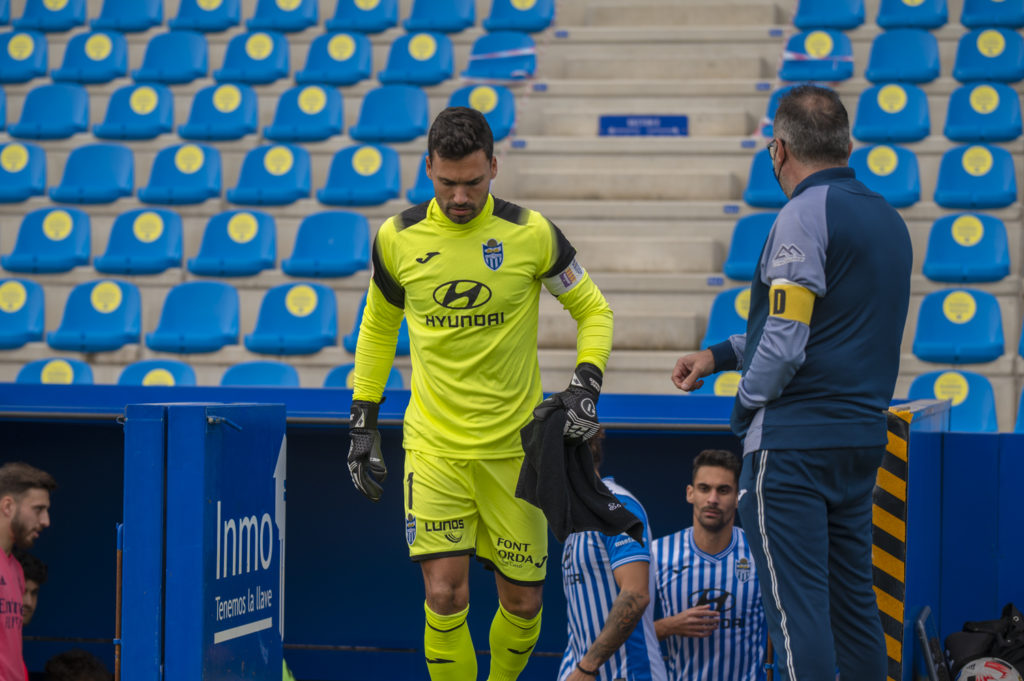 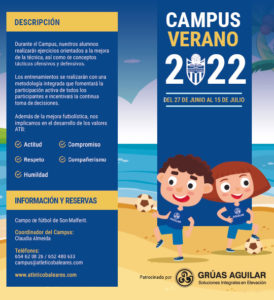 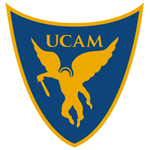 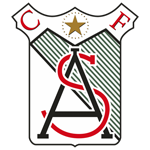