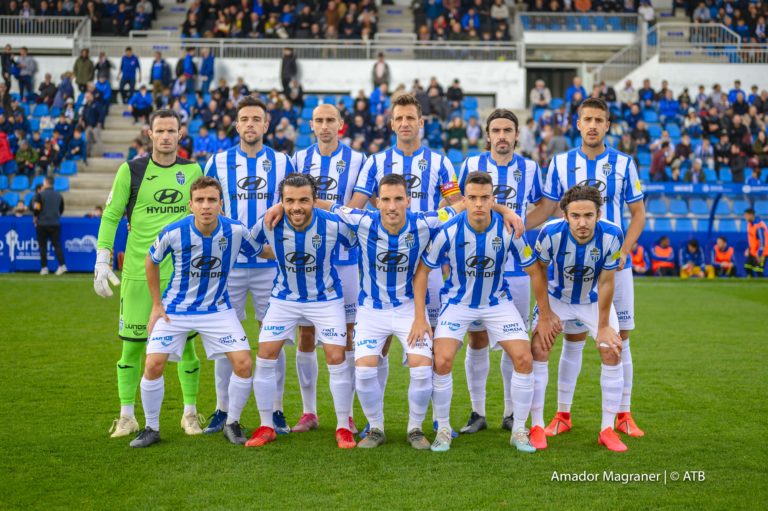 The first loss of the season arrived in the second game of the season. ATB faced a tricky fixture against Rayo Majadahonda in a midday game at El Cerro del Espino, for whom two ex-ATB players were in the starting eleven in Vega and Gorka Iturraspe. Acosta, Alberto Gil and Peris remained in Palma; the first two with injuries and the latter through suspension, and Baselga travelled with the team but wasn’t back to full match fitness. The team wore their green away shirt for the first time, with black socks and shorts completing the kit.

At the beginning of the second half, Rayo Majadahonda pressed high across the pitch and in the middle of the park and came out extremely positively. The Madrid team had the ball for the opening minutes with more superiority playing out from the back and dictating the rhythm of the game. In the eighth minute, Rayo Majadahonda went ahead with a goal from Borja González who beat Juan Carlos after a long ball in behind Cobo. An exquisite piece of control from the player left him one on one against the keeper. ATB, after the goal, attempted to build more attacks to find an equaliser but didn’t manage to create any serious threat. In the 23rd minute, there was a goal disallowed from the Rayo center back, Rico, after a corner routine straight from the training ground, but his volley at the back post was ruled out for being offside. Atlético couldn’t find any rhythm bringing the ball out from the back and were uncomfortable for the first 45 minutes. Despite this, Pichin could have scored the equaliser in the 27th minute after good pressure from the Balerico forward to take advantage of a poor goal kick from the keeper, but he shot wide. Fito also fired a shot from outside the area straight into the hands of the home keeper. In the 38th minute, good pressure from Alfonso on the keeper nearly resulted in an equaliser but the strike could only shake the crossbar. The team went into the break needing fresh motivation and ideas for the second half. The two Madrid wingers caused a huge amount of danger in the first half and Laerte had two great opportunities to further Rayo’s advantage.

After the break, ATB improved their play with more precise passing and better combinations, threatening to equalise and maintaining a higher pressure on the ball in the center of the field. The Balerico team pushed their rivals for a significant period and were much better at playing the ball out from the back. In the 57th minute, a bicycle kick from Rayo forward Ruben provided a great opportunity for the second goal of the game but keeper Juan Carlos saved the shot in spectacular fashion. In the 63rd minute, Armando came on to the pitch and Jordi Roger changed Atlético’s approach with a back three of Ferrone, Pedro and Olaortua. In the 67th minute, Ruben Sanchez scored the second goal for Rayo after good work on the right hand side, which found him unmarked at the near post to seal the result. In an attempt to breath new life into the team, Jordi Roger brought on Caco for Álex Barrera in the 76th minute, in an effort to create more attacking threat. Haro and Pichin linked up well in the last 15 minutes of the game and, in the 78th minute, Pichin putting a great cross into the area from which Vini almost scored and after a parry from the keeper, Fito stopped the ball dead in the six yard box and shot first time but the pulled off an incredible save to deny him. That goal would have given the team hope of coming away with a point. Luca Ferrone had a great second half in defence and attack, dominating midfield and cutting out everything. Jodri Rodger didn’t want to risk Baselga for fear of exacerbating his injury and was without the option of Coro either, who felt a niggle whilst warming up on the touchline. Bad luck. Next week, we’ll see the visit of Atlético Madrid B at Estadio Balear where the team will need to continue being strong at home and achieve another victory.

The referee booked Pedro Orfila in the 14th minute. Susaeta and Jorge Casado were also given yellow cards. Fito Miranda was booked in the 53rd Minute.

Jordi Roger: “Congratulations to Rayo Majadahonda. It’s a wake up call as to how hard Segunda División B is. We came to the home ground of a very difficult opponent and we knew that. We didn’t start the game well at all, that’s why we were losing 1-0 from the ninth minute. It was a goal that we could have defended better, to be honest. If from the ninth minute you are losing 1-0 in Majadahonda’s home ground, everything is uphill from there. Afterwards, we got into the game little by little. We had a little bit more possession but we didn’t manage to have good enough chances on goal. We made some really bad decisions in the final third. We were really bad with our final ball and our finishing. They won all the second balls. After the second half, we spoke (at half time) and we started much better. I think that when we were at the point of equalising, when there was still a lot of the game left, we defended really badly again and they scored the second and then the game was over. We changed the system at 1-0, we took a risk, trying with three at the back, because we had to generate more threat going forwards than what we had been doing. We’ll analyse the game and from this mistake we will learn. We’ve watched their games playing with a 4-3-3. They came out with two centerbacks and two wingbacks and they took us a little bit by surprise. We tried to correct that – we put on two strikers that drifted out to the wings to have a numerical superiority. We tried to correct it with the players on the bench because we had to raise the pressure and it has cost us. The first goal they got in behind us with a switch in play and they got a goal right at the start. Today, we’ve not been good. We’ve been sloppy with everything and even on the one occasion that should have been easy, without a keeper there, we weren’t able to score. That would have changed the game because it would have put us at 2-1. With all that said, we have to learn. Every time I don’t win, I’m angry and even more so today because things didn’t go like we wanted them to. If you lose and things go well, in football those things can happen, but today we weren’t good. We have to learn from this because next week we have another really strong opponent.”

Juan Carlos: “Today, we have to be self-critical. Today, we have not been good. Essentially, apart from forcing a great save from their keeper, we didn’t create anything else. They did really well for their two goals and I think that we didn’t do well for either of the goals, but they didn’t dominate us either. They were more fluid with the movement of the ball, but they weren’t all over us. Here, little details make the difference. It is not a moment to lose our heads. We have to go back to work on Monday the same as when we won against DUX and nothing more. We go forward. This is a marathon, not a sprint. When you win 4-0, I said that that result wouldn’t affect us and now we say the same thing. We have to raise our heads and work and be self-critical. I think that this is the only way to grow and improve as a group and as footballers. That’s how it is. This is a message about what the Segunda División B is like. Last week, a journalist suggested to me that it was really easy and I replied to them that there are no easy games. And we have a clear example of it now, in our second game. A team (DUX) goes from losing 4-0 and then is capable of beating a really good team like Atlético de Madrid 3-1 the following week. That is the Segunda División B. This is a level playing field. When things are good, we have to not lose our heads, and when they’re bad, we need to do the same. We have to be calm, work hard and be professional and responsible in our jobs, and pick ourselves back up on Monday with hope and determination to win 3 points on Sunday.” 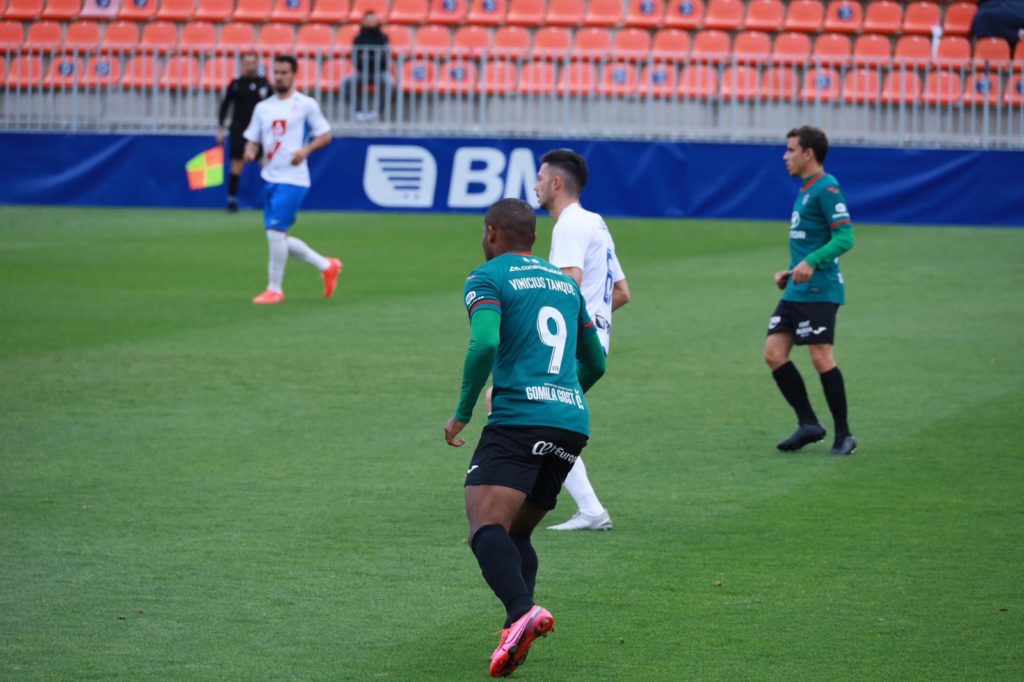 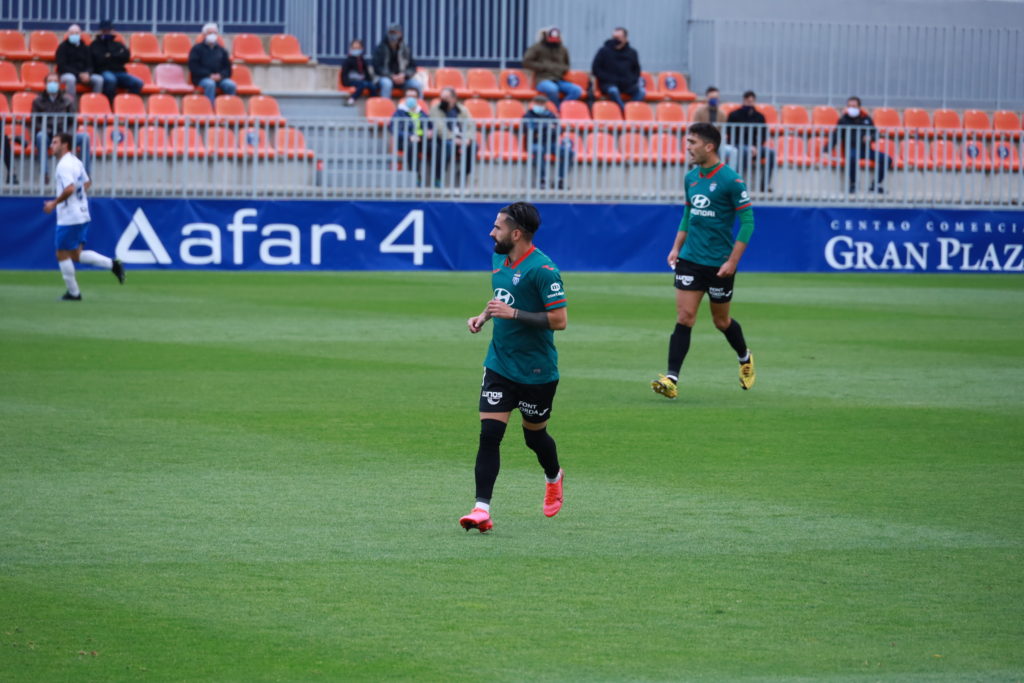 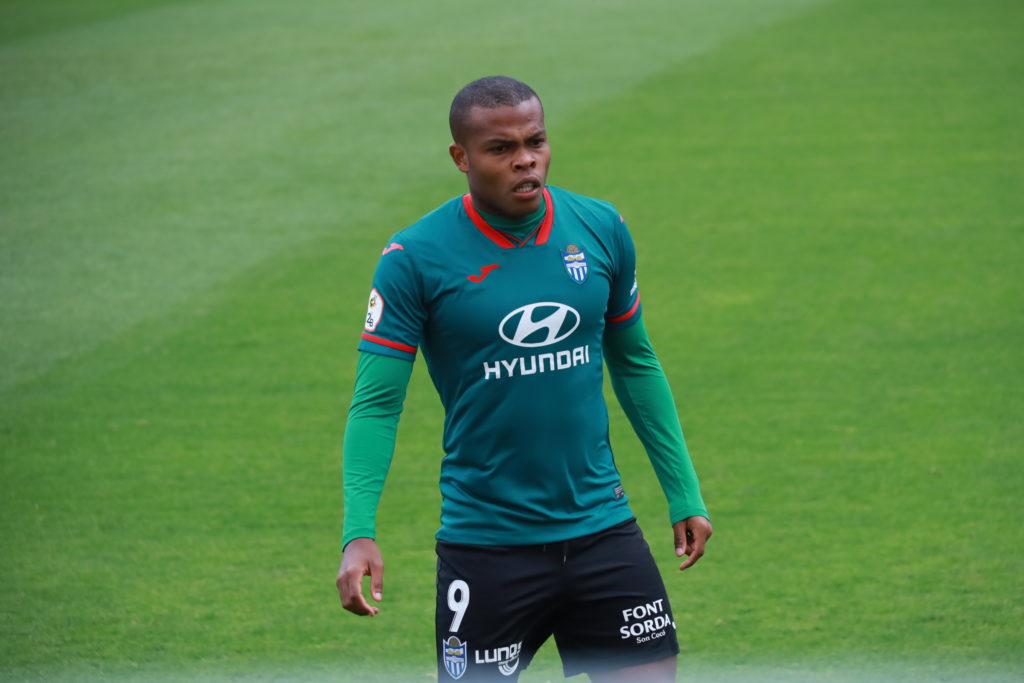 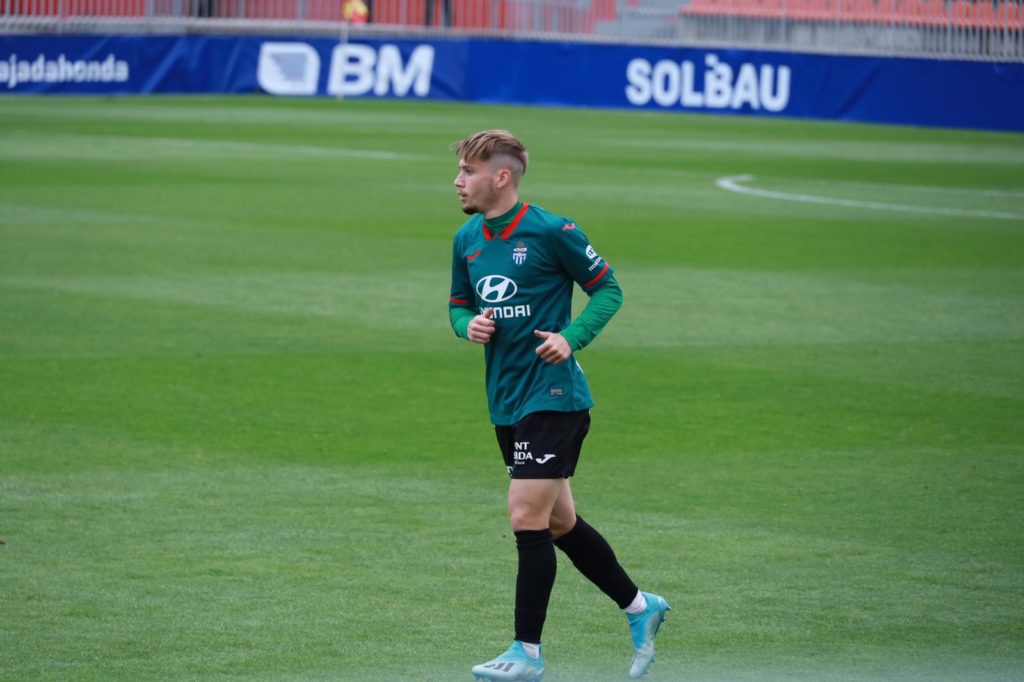 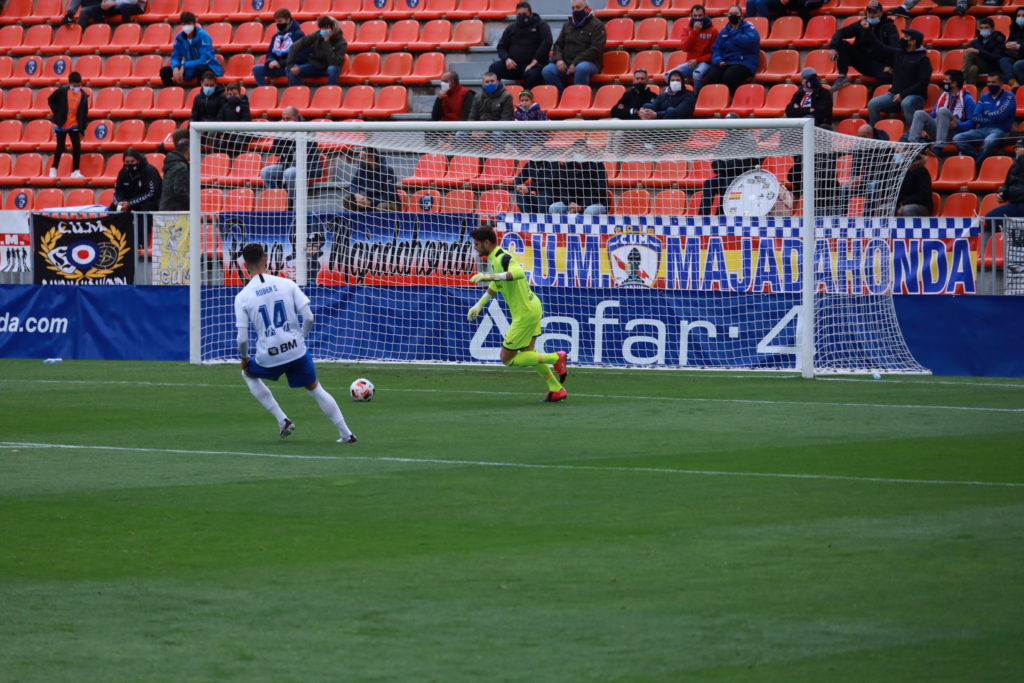 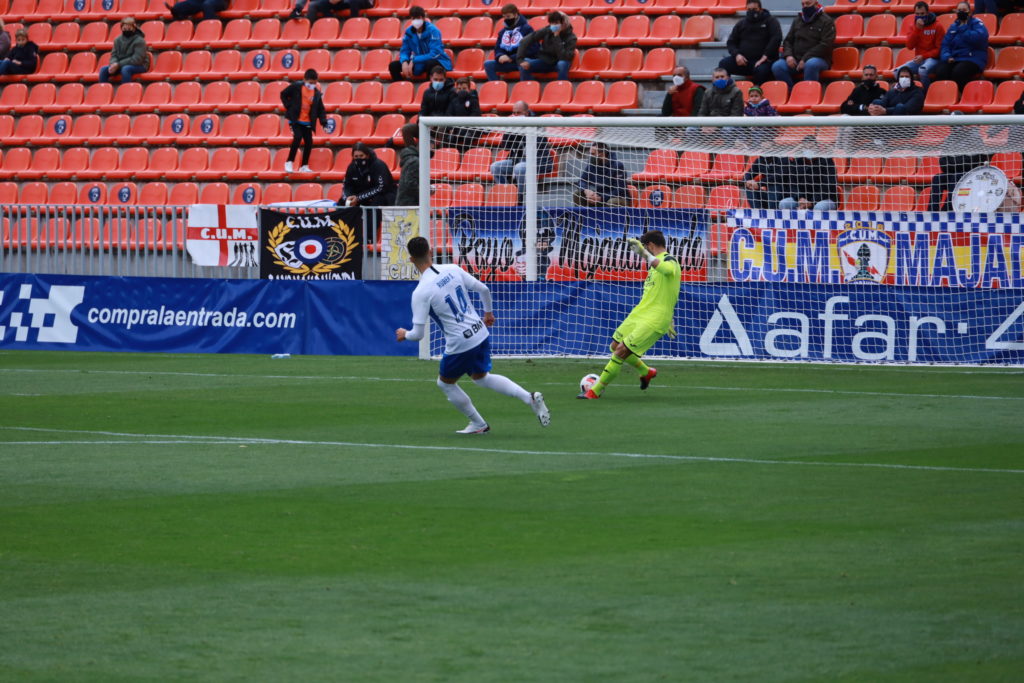 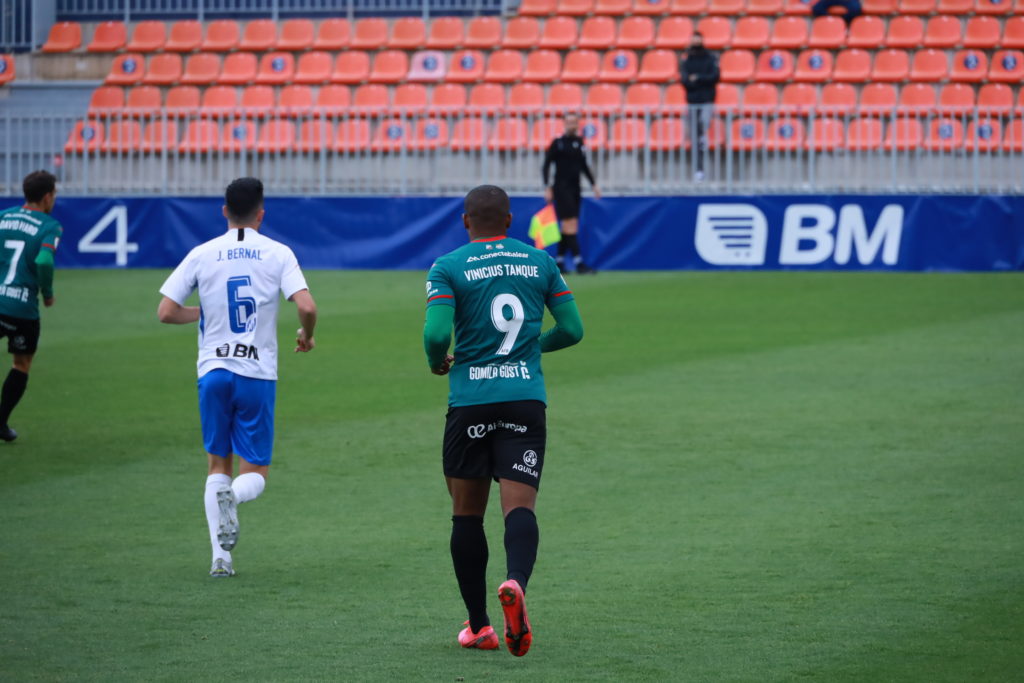 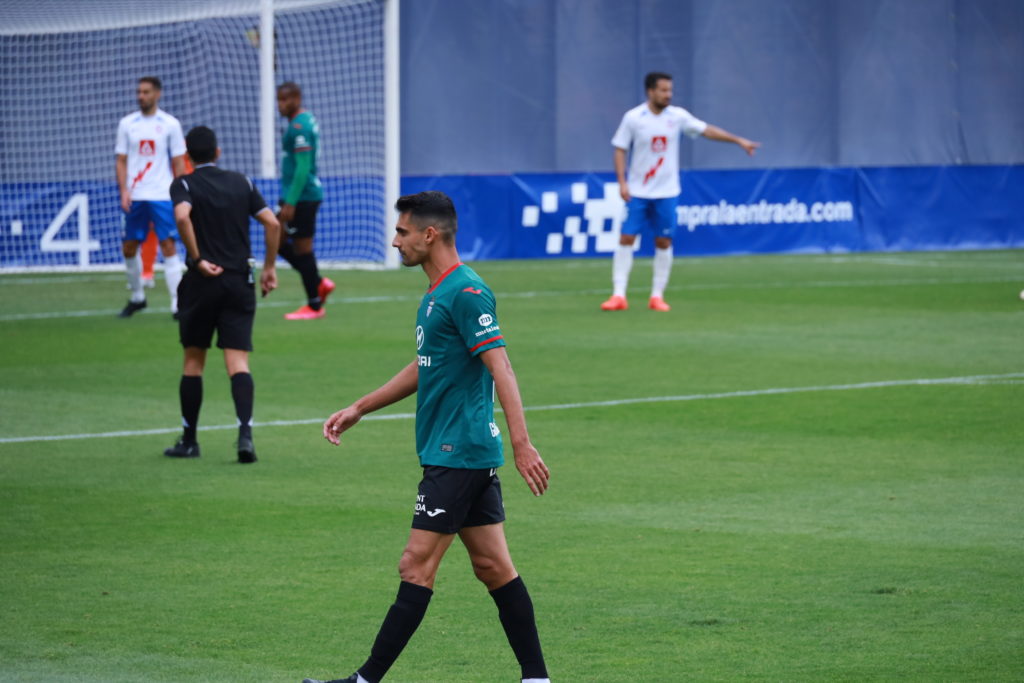 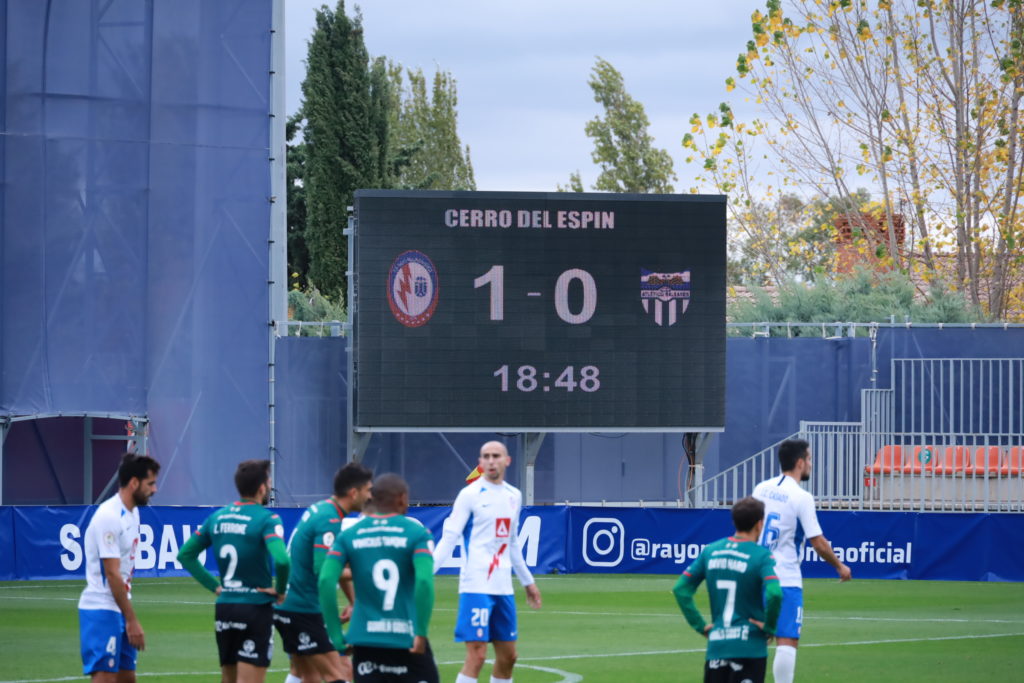 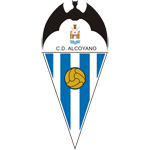